Wicketkeeping great Ian Healy has dismissed Tim Paine's below-par performance behind the stumps in Sydney as a one-off that will have "zero impact" on his long-term future.

It comes as coach and selector Justin Langer gave the keeper the thumbs up for his glovework this series despite Paine putting down five chances. 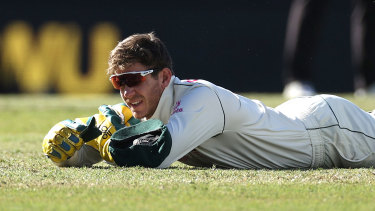 "He's heading away from a potential nick; you have to be not only right behind the nick, but also just a bit outside it covering that with your head over the gloves and watching the ball," Healy, who helped turn around Paine's fortunes with the bat in the 2019 Ashes, said.

"He was too high and not balanced. His left foot was off the ground and going right."

Paine's reprieve of Hanuma Vihari came with victory almost out of reach, but left the captain feeling like a "fool" as it came moments after he had engaged in a heated verbal exchange with Ravichandran Ashwin.

Healy was not critical of Paine's decision to attempt a one-handed catch, instead attributing his late reaction to his confrontation with Ashwin and tiredness.

"His head's full of thoughts – he was just a bit slow and it's all a rush," Healy said. "When you're in good shape and take that catch it will feel like slow motion. That was late, fast and rushed. I think fatigue had set in.

"He was cranky, he was desperate, all those sorts of emotions. Watch the ball, we could get a nick here. That's as simple as it has to be, but it was a really hard day.

"He was thinking about the game, thinking about bowling changes, everything. And he's been extremely good at not doing that but, for some reason, that Test got him."

Healy was satisfied with Paine's overall work in the series and does not believe his position in the side is at risk.

"[It will have] zero impact on his wicketkeeping future," Healy said. "He's gloving the ball as well as he has, it's going in nicely.

"I'm definitely only putting it down to an average moment of the first drop. That's started the lot and translated to a bad day, but it's quite an easy fix."

Langer is not concerned with Paine's lapse in Sydney.

"I think he's been brilliant," Langer said. "The very fact that he missed some catches probably said he was a bit distracted for this Test match and he talked about that yesterday.

"I thought he batted really well in the second innings, but his keeping's outstanding. He's one of the great wicketkeepers we've ever had in Australia. He works very hard on it, he prides himself on it. I think he's kept really well throughout this summer."