As Haseeb Hameed stood tall and carved Ishant Sharma in front of point, it was briefly possible to close your eyes and think of Rajkot, five years ago this November.

There was no raucous Western Terrace that day, no grown men dressed as bananas, and – in the dry state of Gujarat – no beery singalongs. Just a clean-shaven 19-year-old attempting to find his way in Test cricket, and anointed before his time as England’s next great hope.

History had other ideas. Hameed broke his finger in the fourth Test of that series, and back in county cricket he inexplicably mislaid the art of building an innings. Eventually, he left Lancashire for Nottinghamshire in search of a fresh start. Many wondered if he would ever find it. 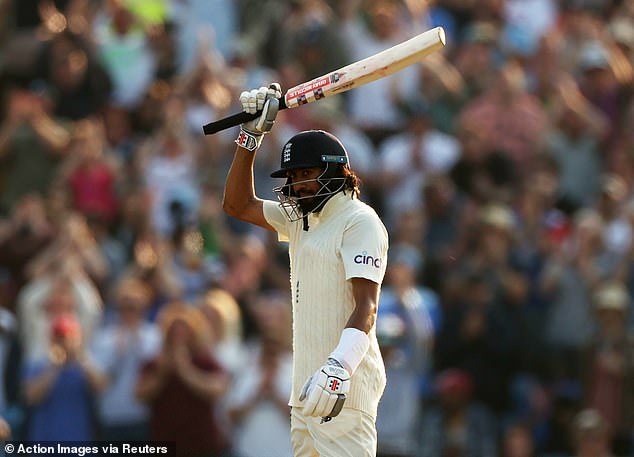 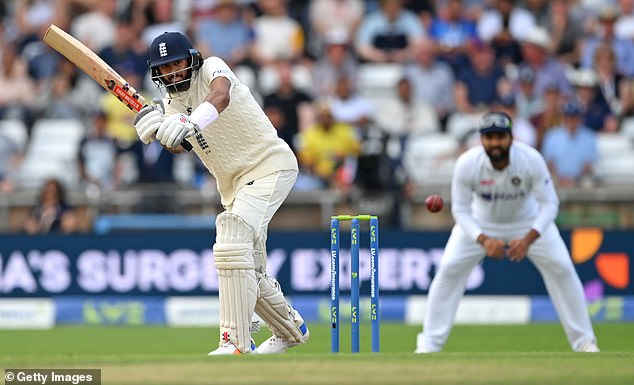 When Hameed walked out to bat shortly after 3pm on Wednesday – bearded, long-haired and a little wiser – he did so with the renewed good wishes of an English cricket community that has suffered with him these past few years.

At Lord’s last week, his return to the big time got the better of him.

He was bowled first ball by Mohammed Siraj, then trapped leg-before for nine by Sharma, having already been dropped in the slips. He looked like his teenage self again – minus the assurance, the strokeplay, the vim and vigour.

Here at Headingley, though, the axing of Dom Sibley meant his restoration as opener, which is where he prefers it. He quickly pummelled a Sharma long hop through cover point, and was always on the hunt for a sharp single.

In the merciless world of international sport, it was impossible to avoid an instant comparison. Sibley would probably have allowed the long hop to pass harmlessly by. And he would almost certainly have struggled to rotate the strike – one of the factors that cost him his place. 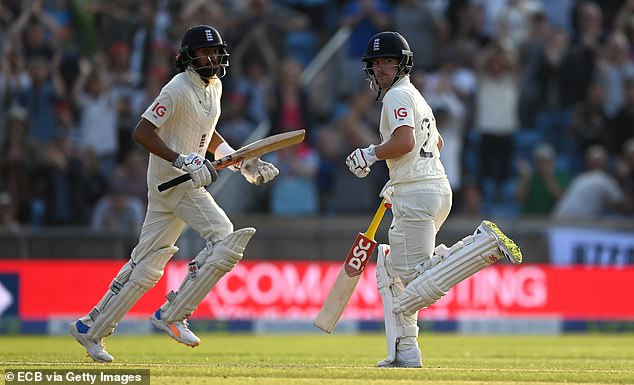 Alongside Rory Burns, Hameed led England to 120-0 at stumps on day one against India

Hameed, too, has at times been dismissed as too one-dimensional. Five years ago in India, some chuckled that he was the ‘Bolton Blocker’. His second-innings nine off 45 balls at Lord’s persuaded them little had changed.

But he is better than that. While Sibley seemed to go backwards, to the extent that his only profitable stroke this summer has been the clip off his legs, Hameed builds his game on orthodoxy, and decorates it with the odd flourish.

When Mohammed Shami aimed too straight, he worked him with a turn of the wrists through midwicket. Then came the Rajkot moment, followed immediately by an open-faced steer behind point. Another carve through the covers, this time off Mohammed Siraj, brought up a collector’s item: a 50 partnership between England’s openers.

If anything summed up the difference between Lord’s and Leeds, though, it was Hameed’s interaction with Siraj.

In the first Test, after inflicting the golden duck, Siraj accompanied Hameed to the crease in the second innings, chuntering away in response to Virat Kohli’s call to give England ‘hell’. Here, as Hameed grew in stature, Siraj cut a subdued figure. 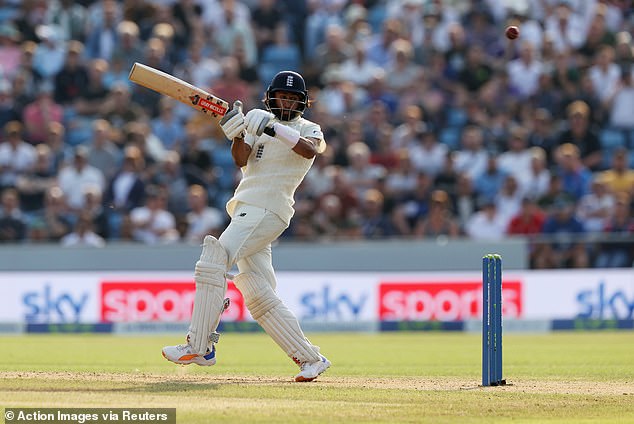 It helps, no doubt, when the opposition have just been skittled for 78, fewer than Shami and Jasprit Bumrah added for India’s ninth wicket on that chaotic final morning at Lord’s. It was also the case that India’s bowlers failed to find the swing that had undermined their own batsmen earlier in the day.

But nothing should detract from the performance of a player who began the innings knowing that a third successive failure might have had him bracketed as just another of England’s top-three stragglers.

At the other end, Rory Burns – left-handed and angular – was the ideal foil, even pulling Siraj for six. And when Hameed steered Shami to third man, a pair of England openers had put on 100 for just the third time in five years.

Soon after, Hameed made his first misstep, only for an edge off Bumrah to evade Rohit Sharma’s lunge at second slip and fly away for his 10th four – and first Test half-century since hitting an unbeaten 59 from No 8 with his injured finger at Mohali.

Headingley rose, a mixture of elation and relief. Possibly feeling something similar, Hameed quietly acknowledged the acclaim. It has been a long, hard road since Rajkot, and – this time – he is damned if his narrative is going to get ahead of itself.