Cricket Australia has handed the Sydney Sixers a $25,000 fine following an "administrative error" during Saturday's clash against the Melbourne Renegades.

Fast bowler Hayley Silver-Holmes had recently recovered from a foot injury and was set to make her return during the must-win game. 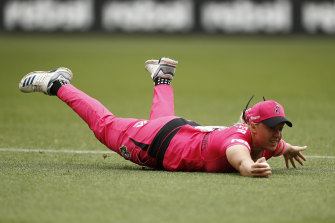 Sydney Sixers general manager Jodie Hawkins said the club would "learn" from this mistake after appearing senior the Senior Conduct Commissioner on Sunday.

"We made a regrettable administrative error for which there are understandably stringent rules," she said.

“We were given a fair opportunity to present our case in the hearing and accept the findings and sanction."

Last summer, Hobart Hurricanes player Emily Smith was banned for 12 months, nine of which were suspended, for posting a video of her team’s line-up on Instagram.

The video was taken from the restricted area of the Burnie Sports Centre before the match against the Sydney Thunder, and was posted an hour before the official scheduled release of the side.

While the game was later washed out, Smith was found to have broken anti-corruption protocols and handed the hefty suspension.