For the best part of the past 15 months, Steve Smith has shouldered arms to questions regarding his leadership ambitions. He is now on the front foot. The campaign is on.

Smith’s declaration he wants the Test captaincy back should come as no surprise. He said as much over the summer. It has certainly not come as a shock to the powers that be at Cricket Australia, who will ultimately make the call on whether there will be a full redemption story for the one-time golden boy of Australian cricket. 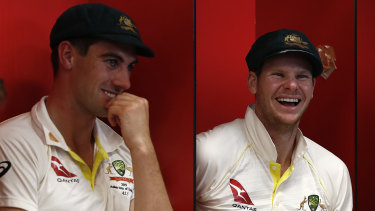 Pat Cummins has the inside running to succeed Tim Paine, but Steve Smith has publicly stated his desire to return to the top job.Credit:Getty

The wild response to Smith’s shadow batting during the SCG Test is an indication of the strong sentiment against the batsman, so too some of the responses on talkback radio on Tuesday.

As sensitive as the issue remains at board level, there is more preparedness now than any time the previous three years to explore the idea of Smith being reinstated. The “double jeopardy” view that his offence was so grievous he cannot lead again has softened.

The board will not formally discuss the issue until mid year, its more pressing leadership matter being the hunt for its next chief executive, which has been filled in an interim capacity by Nick Hockley for almost 11 months.

Though Tim Paine has not told selectors of his planned end date, perhaps as he does not yet know, selectors are well down the path of succession planning – with or without Smith.

Pat Cummins would not be the vice-captain in all three formats if selectors were not confident of his ability to lead, though there are genuine concerns whether the pace spearhead’s performance will suffer as a result of the extra responsibilities. Cummins himself is unsure if he wants the job.

CA otherwise could not find a safer pair of hands than the cleanskin from Penrith with an interest in climate change and Indigenous affairs.

There is no clear candidate behind Cummins. David Warner is banned for life. Travis Head cannot get into the XI. Marnus Labuschagne is light-on for leadership experience.

Which brings us back to Smith, whose home state effectively threw its support behind Cummins by appointing him as NSW’s one-day captain.

In the post-Cape Town world, selectors are more conscious than ever leadership extends beyond having one or two slips in play.

Indeed, there is a belief among senior figures around the team Smith, who has worked extensively with Gus Worland’s mental health charity and this week launched his own cricket academy, has come back a wiser and more mature person.

His recent form, however, suggests there is room for improvement. His failure last month to hide his disappointment at a contentious umpiring call in a Shield game was in keeping with a player who is not always aware of his standing in the game. His lukewarm response to Cummins’ performance on debut as NSW captain also raised eyebrows.

Not many batsmen win getting on the front foot to Cummins. Smith will be hoping he is the exception.